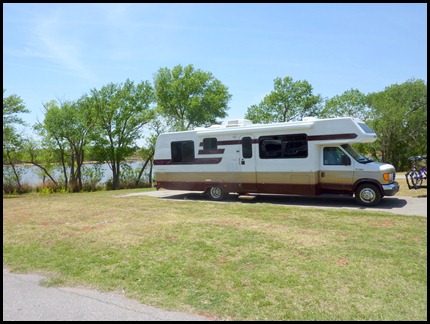 We drove 143 miles to Elk City, Oklahoma today, a boring, not very scenic drive, but I-40 is nice and smooth and there was very little traffic.
I found Elk City Lake Park on the Escapees Days End Directory and on freecampsites.net. When we arrived around one, there was nobody else here, but as we were unhooking the car, a travel trailer pulled in. There are only 5 sites with electric right on a small lake, and it’s free! We initially thought the power probably wasn’t working, but we tested it and was fine. Since it was in the low 90’s today, we definitely needed some AC. There is a 3 day limit, but we’re only planning to spend a night. Sure beats a Wal-Mart parking lot. 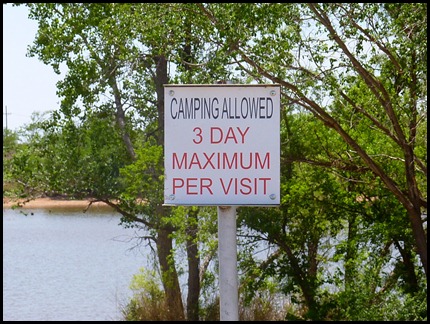 Speaking of Wal-Mart, we decided to skip the one in Amarillo and shop after we got here. There is a nice new one just a couple miles from the park, and we also wanted to drive through downtown Elk City. This is another Route 66 town, and was much more prosperous looking than some of the others we’ve been to.
When we got back we had a new neighbor, who was eating lunch and charging his phone at the site next to ours. Nope, no tent. What you see is what he had. Later he took his few belongings and moved down by the lake under some trees. 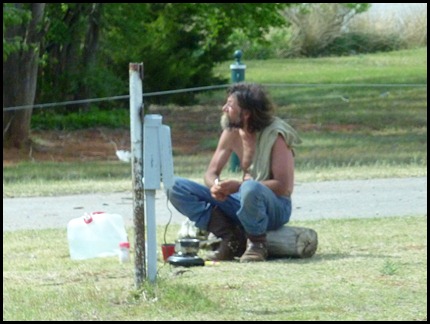 Now Jim is afraid someone will steal our power cord for the copper during the night.
Forgot to mention our funny GPS experience yesterday while driving to Palo Duro Canyon. If you’ve ever traveled in Texas, you know they have Farm Roads, similar to county roads. They are marked as FM, followed by a number, on the road signs. The snooty little British voice, Daniel, in our GPS, told us “in .8 miles exit right to “Federated States of Micronesia #1541”.  Where did that come from??  We spent about 6 weeks in Texas in Nov/Dec 2008, and we never heard it say that before. Gave us a good laugh!
More boring Oklahoma driving tomorrow but it’s giving us a chance to listen to a book and some podcasts on the MP3 player.
Posted by Jim and Gayle at 5:12 PM