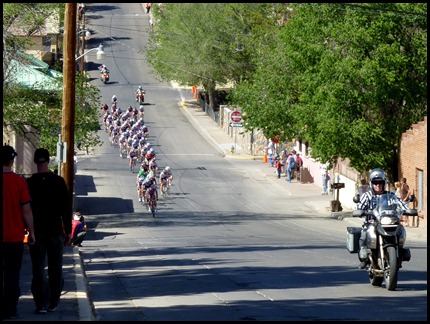 The wind was “only” 25 mph yesterday so we took a 32 mile drive north to Silver City, a nice community of about 10,000 people near the Gila National Forest. We really liked the historic downtown, where the Tour of the Gila bicycle race was taking place for the 25th year.
This is a picture of a pedestrian bridge over the Big Ditch Park, which looks like a river. It was actually the original Main Street, but flooding in the late 1800’s dropped the street down 55’, so the town was rebuilt a block away. The ditch remains and has water flowing in it year round. 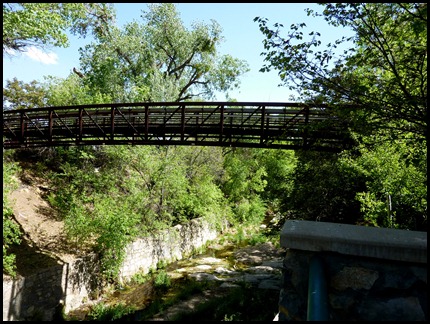 We used to follow professional cycling when we had a house and cable TV, so we were excited to be able to watch a bike race. Saturday’s stage was a criterium, where the riders go multiple times around a set course, in this case a 1.1 mile loop through downtown. We got there in time to watch the pro women’s race. They had to ride around 25 times. 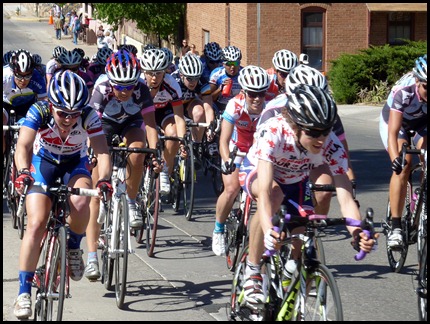 The pro men followed but they went around 40 times, and appeared to be riding much faster than the women. We walked the route during each race so we could watch them at different points of the course. Amazingly there were no crashes on these tight turns. 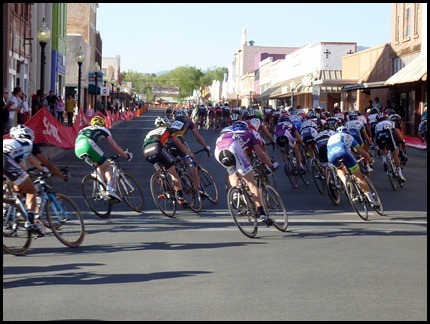 The tires are piled up for cushioning in the event of a crash. 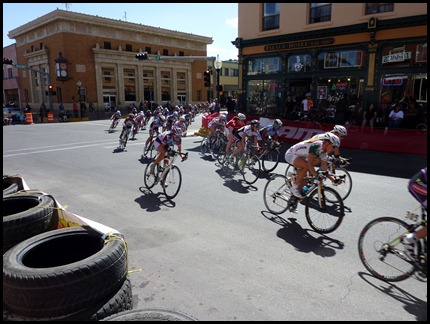 Western New Mexico University is located here, so we saw a couple vegetarian restaurants and health food co-ops. We tend to like small college towns. Makes for interesting people watching, with lots of wildly colored hair and tattoos. And cute dogs. This is Mesa, who carries her favorite toys with her everywhere she goes. Her owner was a character also, who had obviously spent too much time at the Beer Garden. 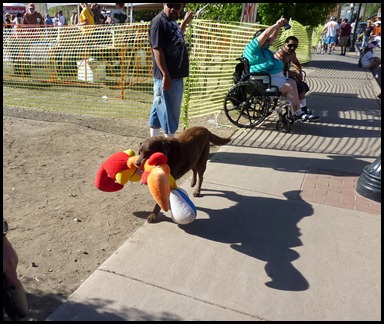 This guy had the right idea. 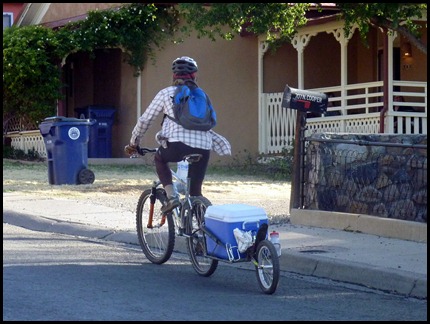 Since we were too early for dinner, we indulged in a Pantani Pink gelato, in honor of  Marco Pantani, a famous Italian cyclist who was a former Tour De France winner. He died in 2004 of a cocaine overdose. The gelato was sour cherry with bits of dark chocolate and it was excellent.
We had a really fun afternoon, and have put Silver City on our list of places to come back to. Next time we intend to visit the Gila Cliff dwellings.
Posted by Jim and Gayle at 7:09 PM