No, we’re not buying an Airstream, but since we were 27 miles from the factory in Jackson Center, OH, we decided to take the tour. Jim realized he forgot the camera while we were driving there, but as it turned out they don’t allow photos, so it didn’t matter. The tour starts in the service center lobby, and the whole building has aluminum walls and Airstream decor. Pretty classy. There is also a store which sells everything from Airstream clothing to Christmas ornaments.

The only thing they allowed us to photograph was the service area, where they had this chopper and sidecar designed by Jesse James. We were told his ex-wife Sandra Bullock has an Airstream trailer, too. 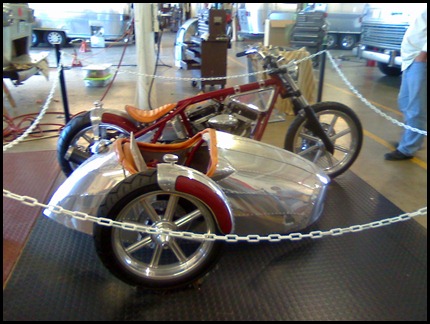 The tour lasted about an hour and a half, and it was really fascinating to watch the workers assembling them from the ground up. It only takes 9 days to build from start to finish. They turn out about 35 per week now, but back in the 60s at their peak they turned out 23 per day.

They are then shipped to RV dealers around the country, so there is no showroom at the factory. We didn’t get to see any that were completely finished, but as much as we like the exterior, the ones we went in felt kind of cramped inside. Guess it’s good we didn’t fall in love with them, since they’re pretty pricey for a travel trailer.

Today we drove about 120 miles to East Harbor State Park, in Lakeside- Marblehead, OH, on Lake Erie. This is one of those giant parks with over 500 campsites. Most of the sites are fairly close and open but we managed to get a shaded, private site. Even though we can hear the boats in the harbor behind us, there are no views of the lake from any campsites. 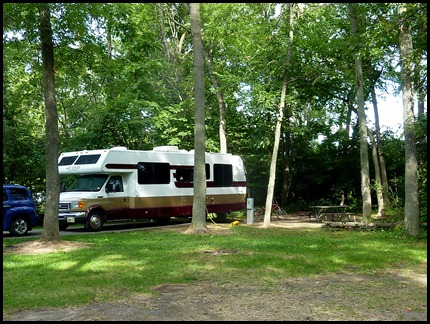 Tonight we rode our bikes around the park and to the beach. I grew up in Erie, PA and spent lots of time on the beaches of Lake Erie. When I moved to Pensacola I was awestruck by the white sand. I always thought sand was supposed to look like dirt. 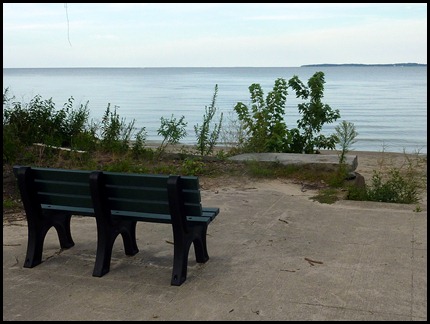 We were planning to take the Lazy Daze on a ferry to Middle Bass Island Thursday, but Oreo is not doing well and we aren’t sure we want to be on an island for 4 days where there is no vet. Guess we’ll see what happens tomorrow.