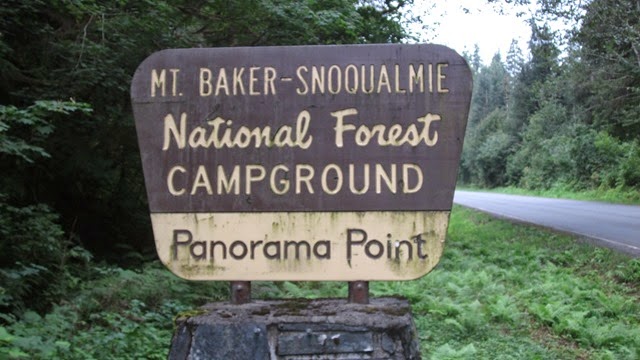 It was an easy 48 miles Tuesday to Baker Lake, but shortly after leaving Anacortes Jim noticed something didn’t feel right with the transmission. It was a bit hilly so he engaged the tow/haul feature and thought it felt better. I looked at our tire pressure monitor which showed all pressures where they should be and tire temperatures in the 90s. He checked the Scan Gauge and all was normal.

The campground is located 19 miles north of Hwy 20 on Baker Lake Road, with a few more ups and downs and twists and turns. I, too, became aware of the feeling that the transmission was slipping, and Jim thought it was getting worse, so he waited for the next level pull-off to stop and check the fluid level and disconnect the car.

Seven miles from Mount Baker but the clouds would barely let us get a peek. 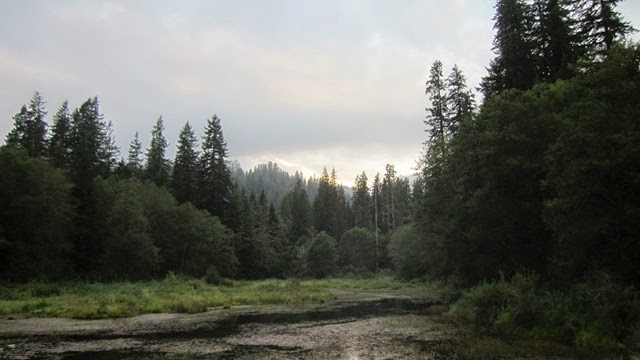 Debbie was following behind us and called on the radio to ask if we smelled something burning, which I had also just noticed. When we pulled over and Jim got out he recognized the smell of hot brakes, and sure enough the front tires on the car where very hot. I looked at the TPMS and those two tires were in the 130 degree range, where the others were still in the 90-100s. The transmission fluid was fine, and we unhooked the Subaru, turned off the switch to the auxiliary braking system, and continued the last five miles up the road. All was well and the Lazy Days drove fine. A big relief the transmission wasn’t acting up. But with no phone or internet, research on how to fix the problem would have to wait.

When we arrived at Panorama Point, our friend and camp host extraordinaire Jimbo was waiting and showed us to the great site he held for us, a private double site right on the lake. He said he wasn’t sure we could get level but thought there was a chance. Try as we might and using all of our leveling blocks, we were still so slanted it was like walking into a fun house.

He said there were no more sites that would accommodate us there, but to follow him a mile down the road to the next campground where we would easily fit. But first he had one more idea, and asked us to wait. Apparently after some sweet talking and bribery, he got some folks to leave their site and move to the one he held for us. He said his “team” (meaning us) would help them move all their stuff. So we did, then swapped places with them. No problems getting level and still close to the lake, but with much less privacy. 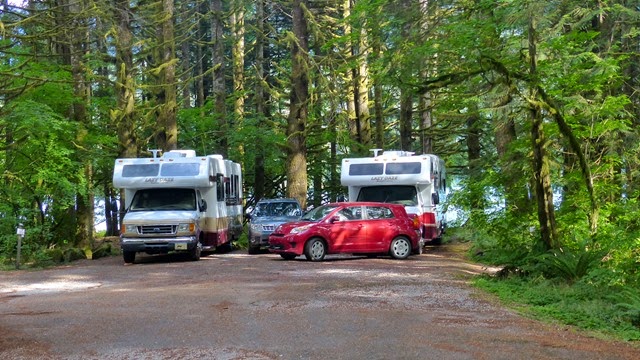 Jim and Sophie walking in our backyard. 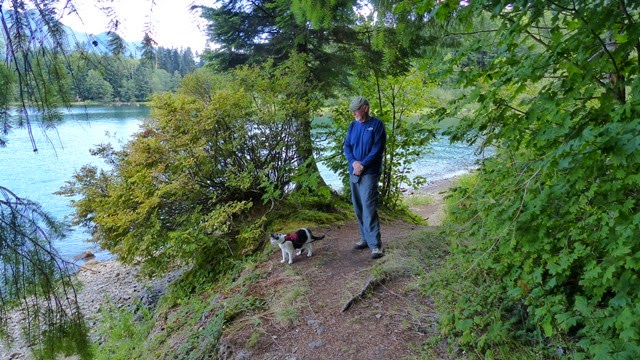 The lake is just gorgeous. 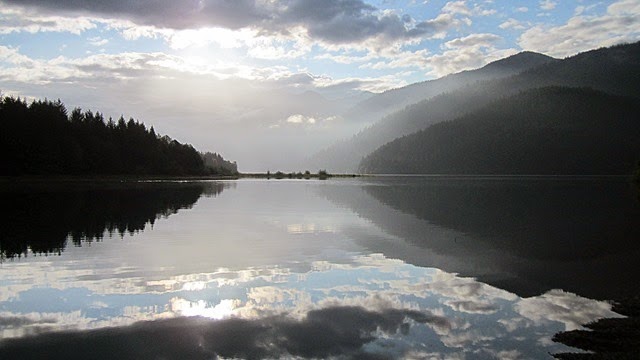 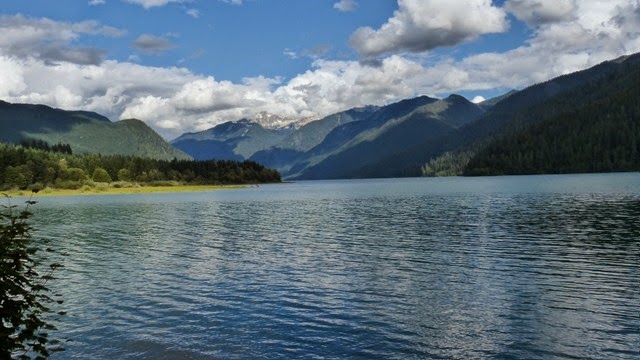 At happy hour that evening we got to visit with Jim and Chica and listen to his camp host stories.

Chica catching up with old friends Sophie and Elvis. 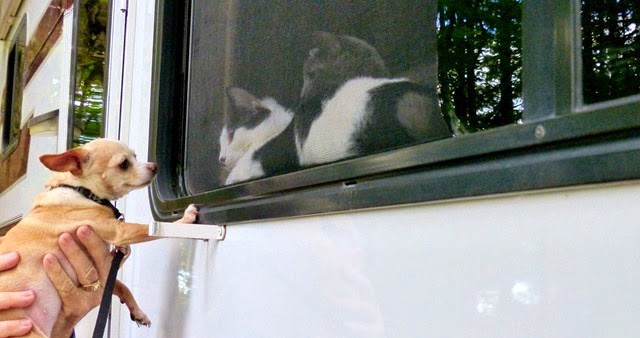 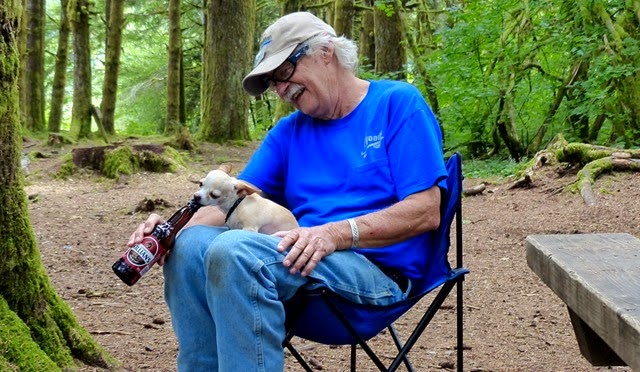 The following day Debbie, Jimbo and I took a little hike on the Baker Lake trail, a 14 mile trail along the eastern shore.

This sign at the trail head made us a bit nervous. 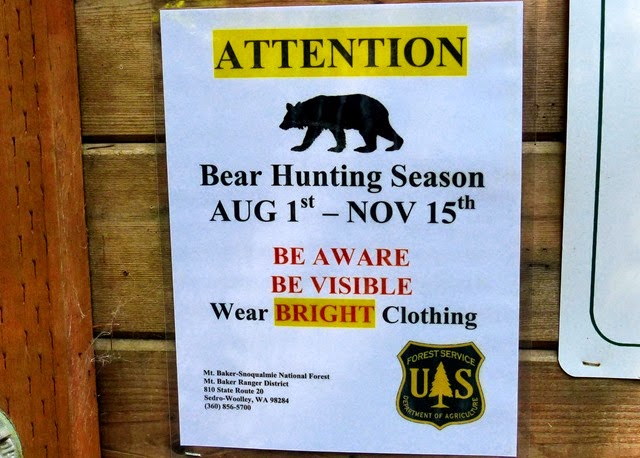 It was a very scenic trail, and although the guide says it is level and family friendly, there are some pretty steep ups and downs in places. 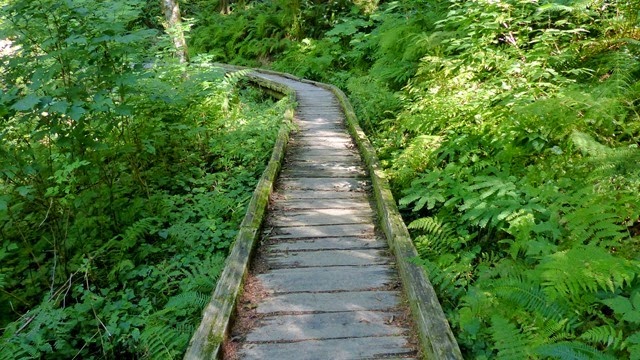 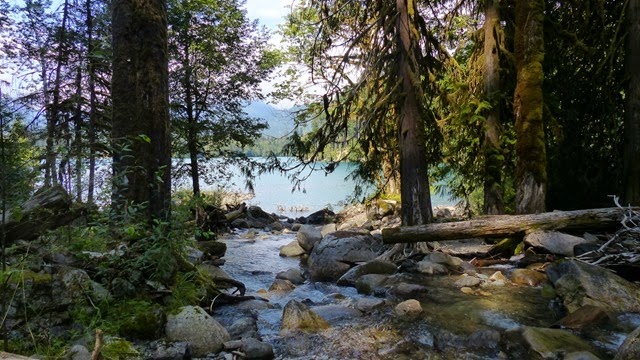 I almost didn’t make it across this bridge. 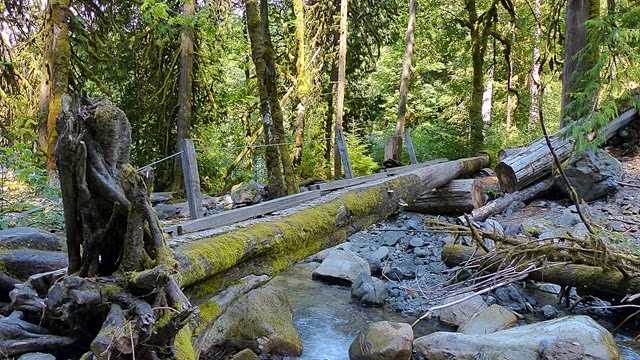 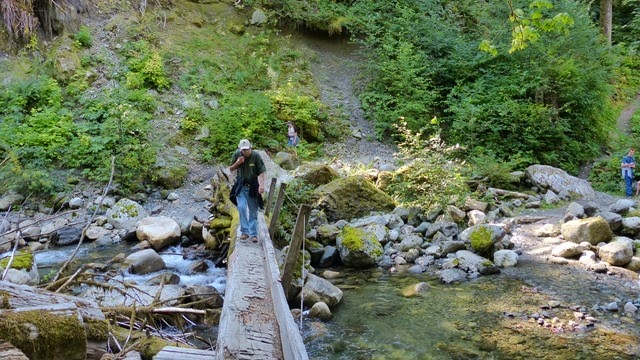 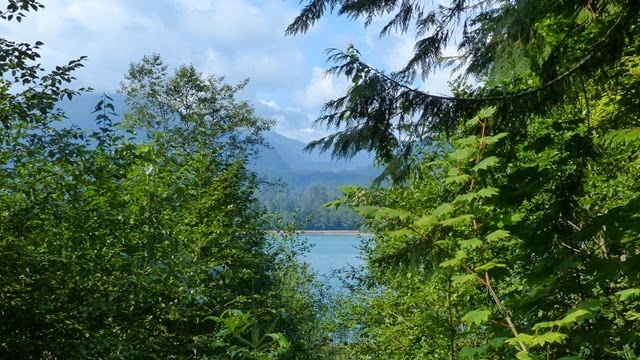 We also took a scenic drive to the north end of the lake, which was full of giant tree trunks. 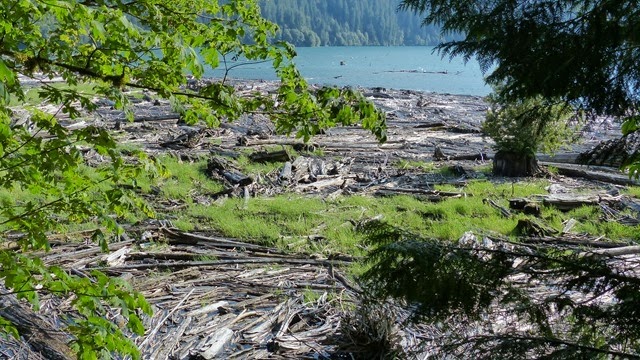 And another stop at the Mount Baker viewpoint to see if the clouds would cooperate, but not quite. 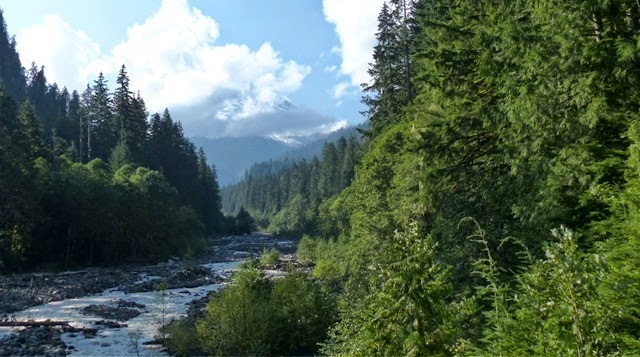 I did get to see a little more of it the last morning when I took an early walk. Mount Baker, we know you’re there. 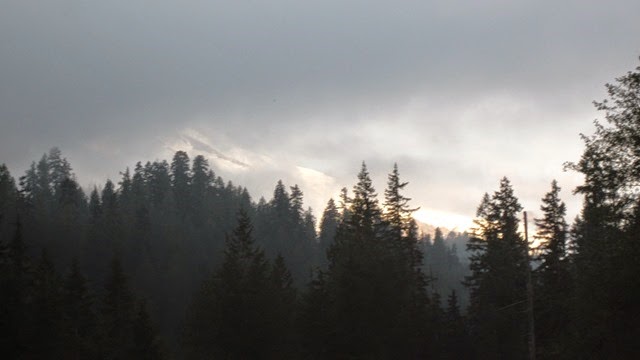 We enjoyed spending time with Jimbo and Chica, but with the lack of internet and no sun for our solar panels, two nights was our limit. Yesterday we moved on to the North Cascades National Park, where we still don’t have much sun, but the 4G connection makes up for it!