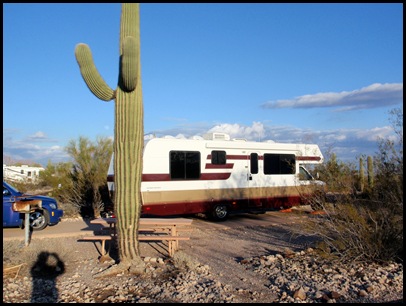 We arrived here yesterday afternoon, an easy drive from Gila Bend. The Shell station had a truck scale, so we weighed the Lazy Daze and car on our way out. We were happy that we were about 200 pounds under weight, although we were only carrying a small amount of fresh water, but a full tank of gas. Guess some of the cleaning out and disposing of things we’ve done has paid off, since the last time we were weighed in Oregon we were 100 or more pounds over.

This is a beautiful desert park, home to most of the Organ Pipe Cactus in the U.S.  And we were surprised to find a pretty good Verizon connection, although Jim was a bit concerned it may be coming from Mexico. Debbie called Verizon and they gave her a code to turn off the international roaming feature, which we did also, and we still have a good connection. 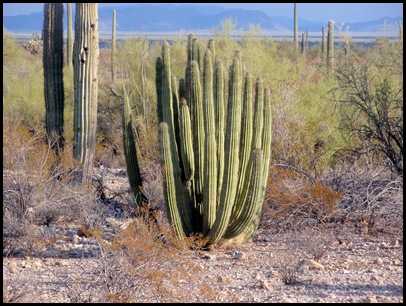 We are so happy to be away from civilization and out of RV parks. We did stop at the IGA in Ajo on our way. It was a very nice grocery store, with a good selection and fair prices.

The national monument  has very large, nicely spaced sites, no hookups but water and a dump station, for $12/night or $6 with the senior pass. Last night was our first in a couple weeks where we could hear no road noise. What a nice change.

Today we walked over to the Visitor Center and found several hikes we want to do. We may also take a drive into Mexico and check out Puerto Penasco, on the Sea of Cortez, which is only about 65 miles from here. Many Americans in RV’s spend the winter months there and we are curious to see some of Mexico away from the border towns. We’re enjoying the mid to upper 60’s and sunshine. Also now that we’re back in Mountain Time instead of Pacific, it’s staying light until 6:30 or so. Think this will be a nice place to spend some time. 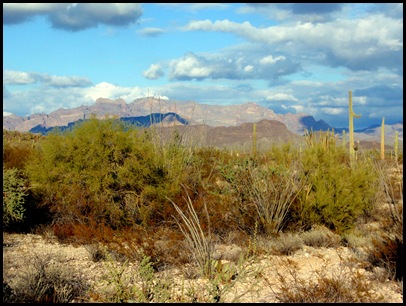 I liked this picture Jim took from our roof, especially since I’m afraid to climb the ladder to go up there. 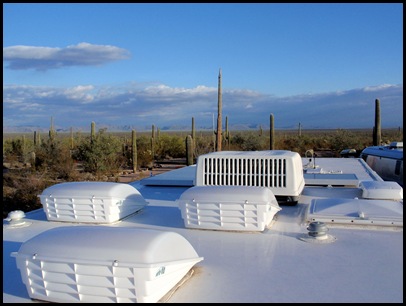