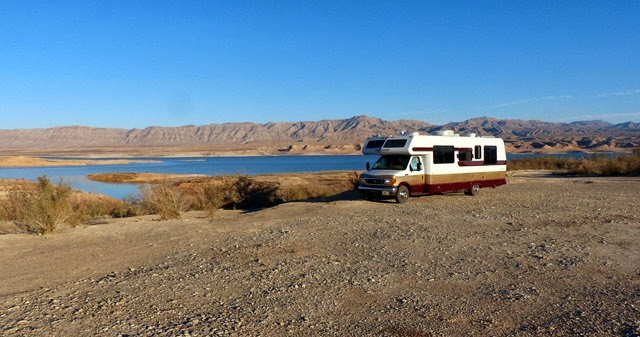 We left Las Vegas Sunday, taking a leisurely 60 mile drive along Lake Mead Parkway to Northshore Road towards Overton, NV. The lake wasn’t visible until the last few miles of the trip, but the rolling hills and colorful rock formations made it quite a scenic drive. We unhooked the car at a picnic area and drove it down to Stewarts Point, a dispersed camping area we had read about. The road was a couple miles long, part of it being rough pavement, and the rest being a bad dirt road. Of course there is no information about it at all on the Lake Mead National Recreation Area website, but we found a lovely spot and were the only ones around, which seemed odd.

Guess we were so busy looking around on the first trip down that neither of us saw the “No Camping” signs. I noticed them as Jim was driving the Lazy Daze and I was behind him in the car. We decided to just ignore the signs, but then I looked closer and it said “meadow restoration area”, with the universal red circle with a line through it indicating no fires, camping or motor vehicles allowed, punishable by fine. We parked the rig and continued on the dirt road, which got progressively rougher, and came to a sign that said “Backcountry Camping, 15 day limit”. We were thoroughly confused, and then saw about a half dozen RVs. We stopped and talked to a couple people, one who was confused as we were, and another guy who said it was okay to camp anywhere.

We just decided to park before the road got bad and take our chances. We spent a quiet evening, that is until the wind started whipping up about the time we went to bed. It was a long night without much sleep, and the cats were so scared they pretty much laid beside us quietly all night long.

Calm before the storm. 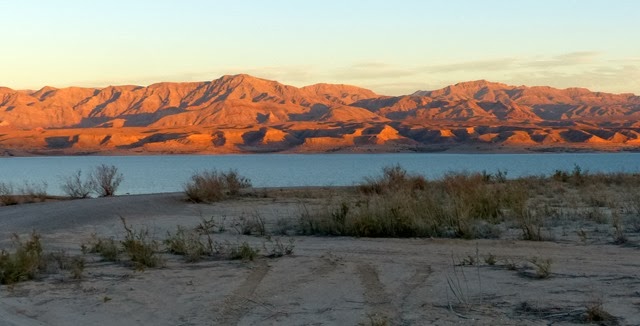 Whitecaps on the water yesterday morning, along with blowing dust. 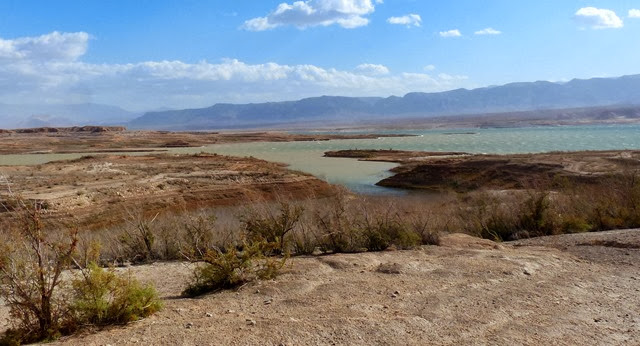 For fun, I called the Lake Mead visitor center and the young man I spoke with said there was no camping allowed at Stewarts Point. I told him I read about it on a blog, and he said if they camped there they did so illegally. But in the next breath he said primitive beach camping was allowed as long as you were at least 100’ from the lake, 1/4 mile from the road (but it’s also illegal to drive off road), and you had to be at least 100’ from any vegetation. Huh? Yes, he said, like you couldn’t be within 100’ of a cactus. Yesterday morning we went scouting out other sites, and when we drove back through the fee station Jim asked the ranger there if you could camp at Stewarts Point. She said, sure, anywhere along the lakeshore! So, our guess is it is okay.

Having said all that, we decided to move anyway, to a mesa right on a canyon, and really like this more remote spot, although we have no view of the lake. In fact not a single car has come down our road, where we had quite a few vehicles driving around Stewarts Point to look at the lake. There is a national park sign stating a 15 day camping limit, so we guess we are still in Lake Mead NRA, although we are outside of the fee area. Debbie left Las Vegas yesterday and joined us on the windy mesa. 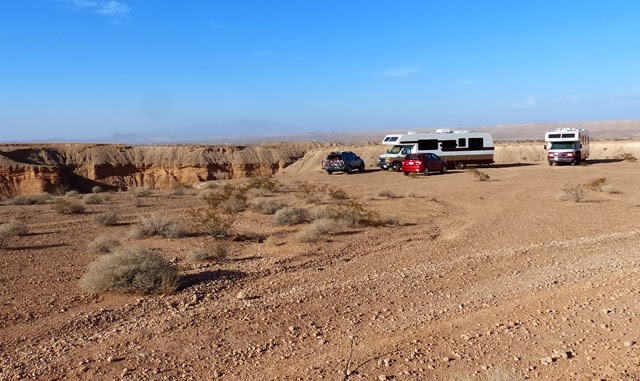 If you continue another mile or so north you come to Snowbird Mesa, where there are dozens of RVs.  There are no signs, but from what I could find out this is managed by the Bureau of Reclamation, and there is no stay limit. Apparently the locals call it Poverty Flats.

This is the view right outside our door. You can barely see the RVs on the ridge on the other side of the canyon. 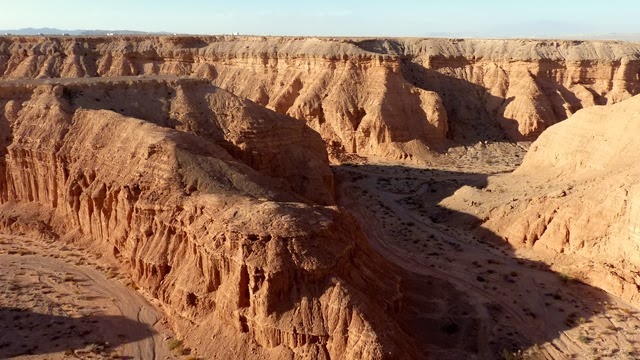 We are just a few miles from Valley Of Fire State Park, a place we have never been, so we intend to do some hiking there. But there is endless hiking right from where we’re parked. Although it’s much cooler today, the wind has stopped and It’s so nice to be away from the big city and out of a campground. We’ve gotten spoiled by all the nice boondocking sites we’ve stayed in this past summer and fall.