The Natural Side of Vegas 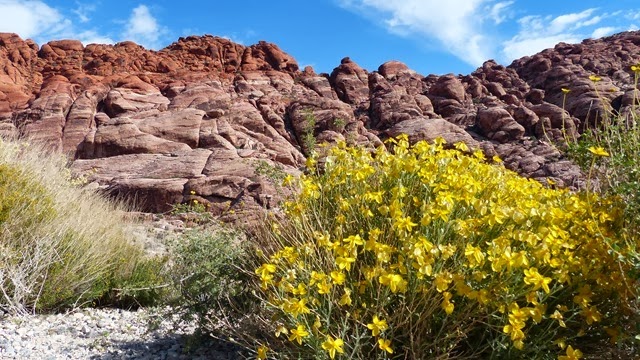 We aren’t fans of big cities. Too many people, too much traffic. We’ve stopped in Las Vegas twice before to do some shopping on the way to California and stayed in RV parks on Boulder Hwy. Convenient but noisy, and we couldn’t wait to take care of business and get out of town.

This time around we stayed at the Red Rock Canyon Campground, managed by the BLM. 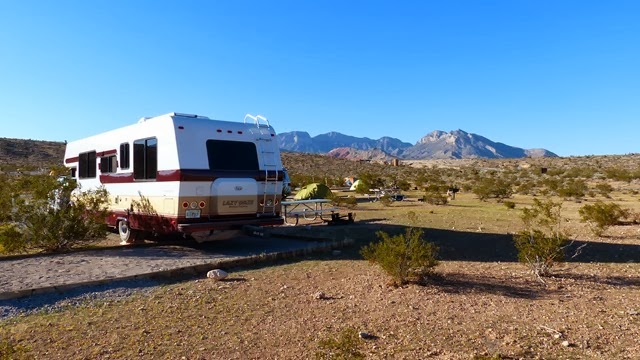 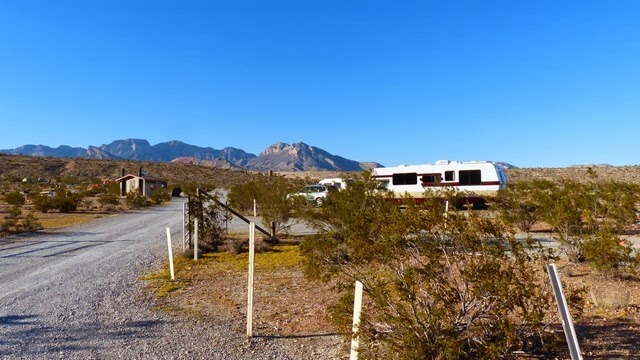 What a better choice. It is located just 5 miles west of a really upscale part of town, but has the feel of being miles from civilization. And it was only 7 miles from our Pensacola neighbors, whom we visited with the other night.

This is dry camping only, and no RV dump, which may be why there were so many tent campers. Actually it appeared most of the people camped there were climbers, as this is one of the big attractions to the Red Rock area. There is a water spigot and trash bins next to each restroom (vault toilets), and a recycling bin near the exit. We paid $7.50/night with the senior pass. The downside is we had no internet. With the booster we got a poor 1X Verizon signal, so we could barely load or even open an email. It was a good excuse to take the computers to Panera Bread for breakfast.

Our first night in town we stopped by to see our former neighbors, Kelly and Cindy and their gang. Two years ago when we were back in Pensacola, Cindy was about to give birth to baby #4, so we had never even met the latest addition. They let the kids stay up past their normal bedtime to visit with us. What an energy filled house they have! Can you even imagine four kids between the ages of approximately two and nine? Along with a yellow lab and a black German shepherd? They are such a nice family, and the kids are all very outgoing and happy,  just like their parents. It was really great to see them again. We forgot to bring a camera, so this picture from the phone did not turn out well. I decided to play with it and liked it better this way. 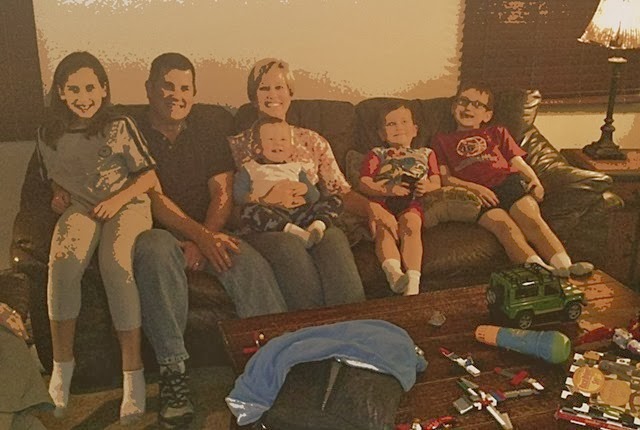 The next day we went over to Red Rock Canyon Conservation Area, just two miles from the campground, to drive the 13 mile scenic loop and go for a hike. This is such a beautiful area! We were here once many years ago when I came to Vegas for a meeting, but did not remember much about it. 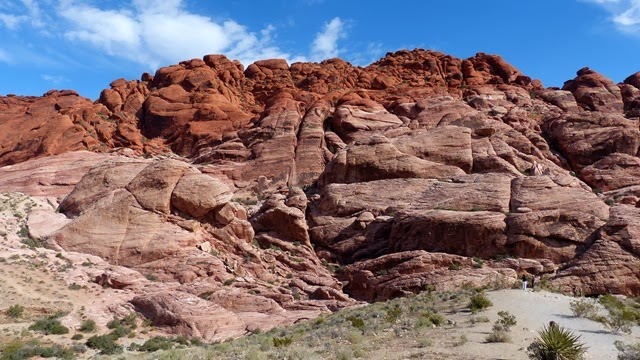 The woman at the visitor center suggested a couple hikes that were about 2 to 3 miles round trip, so that’s what we did. We started with the Calico Tank trail. 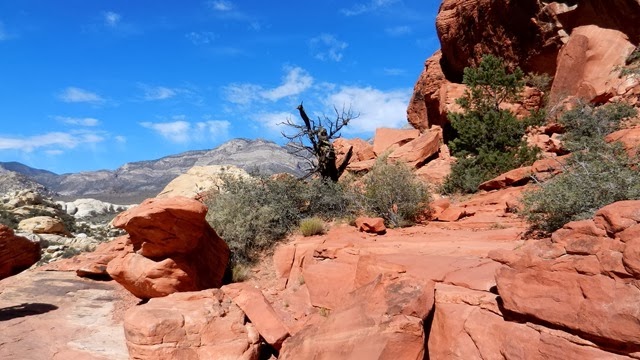 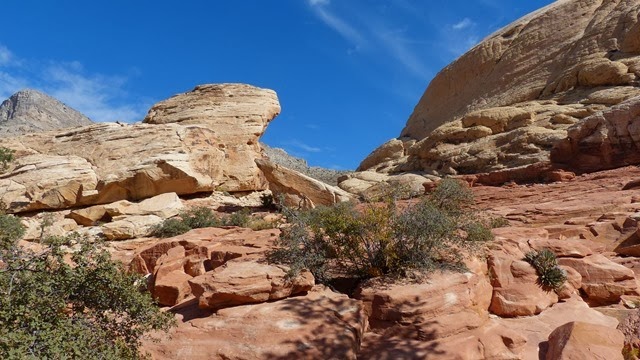 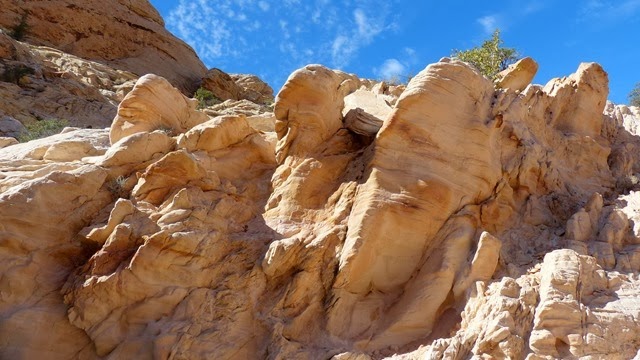 This is a fun trail, with lots of rock scrambling involved to get all the way to the tank. 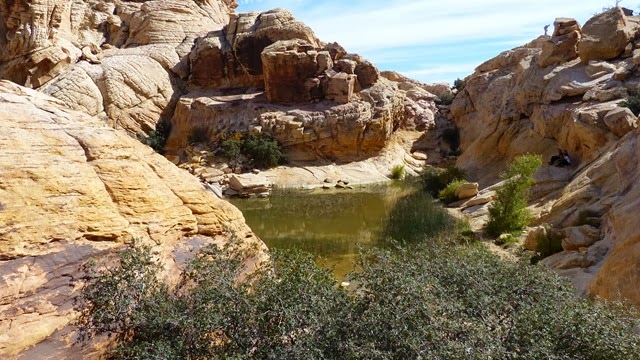 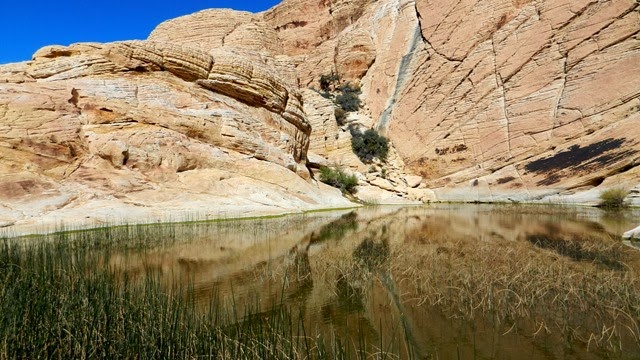 The woman at the visitor center also said “some people” scramble up behind the lake if they want a little longer hike. Jim decided we were “some people”, so we did, too. From there we could see the big city and the Strip off in the distance. 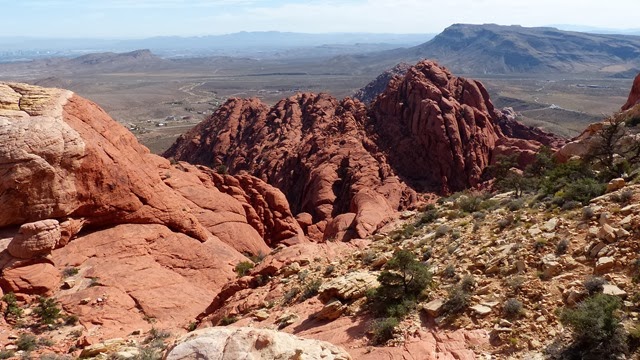 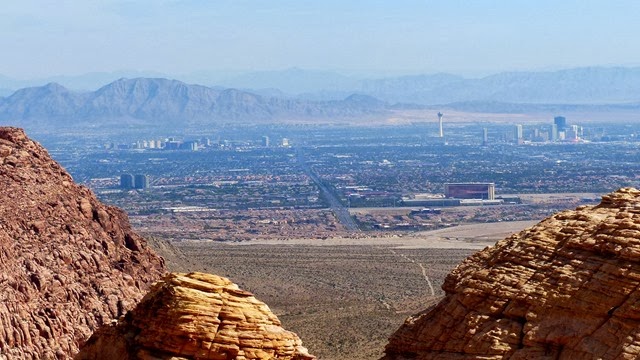 Our second hike was to Ice Box Canyon. Another rocky trail, with about a ten degree drop in temperature once we got into the canyon, hence the name. 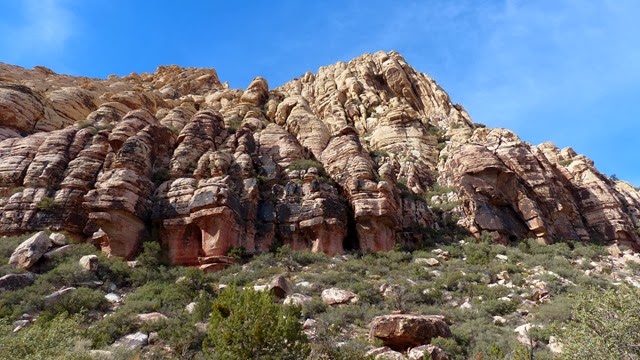 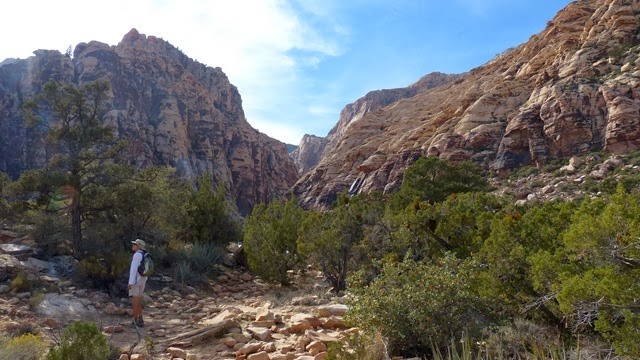 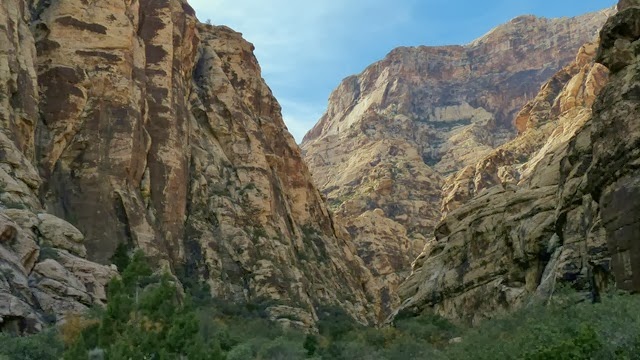 Looking out from behind the enormous rock walls. 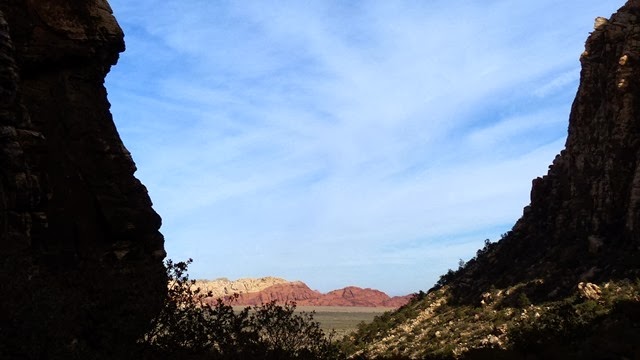 The next day we did some whirlwind shopping. Trader Joe’s, Best Buy, Walmart, REI, Big 5, Home Depot, Kmart, Petco, Total Wine, the Subaru dealer, an RV parts place. We also stopped at a DIY car wash, and Jim changed the oil in both the Lazy Daze and the Subaru. We’re glad to have all that out of the way for awhile.

Friday was a day of rest from chores, which meant going back to Red Rock Canyon for another hike. This time we did the 6+ mile White Rock loop in a different section of the park, rated as strenuous. For a change, we think they overrated this trail as we considered it a moderate hike. Almost 1000’ elevation gain, but nothing overly steep, and no rock scrambling.

We just loved the various colors of the rocks and how they contrast with the vegetation. 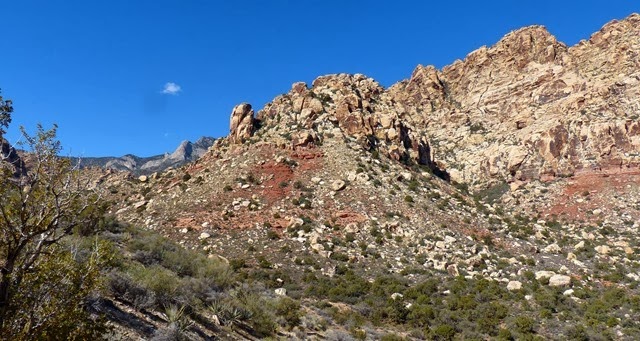 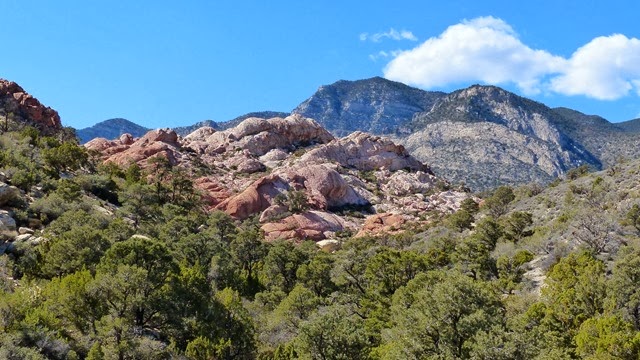 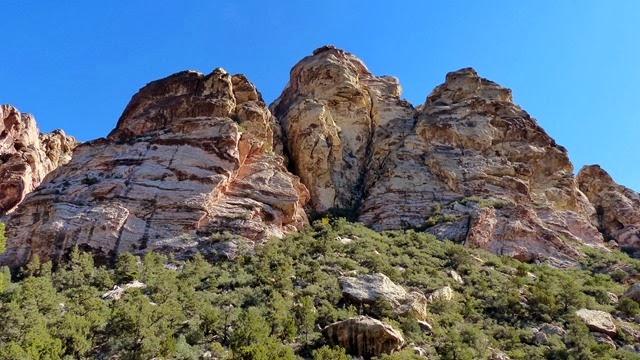 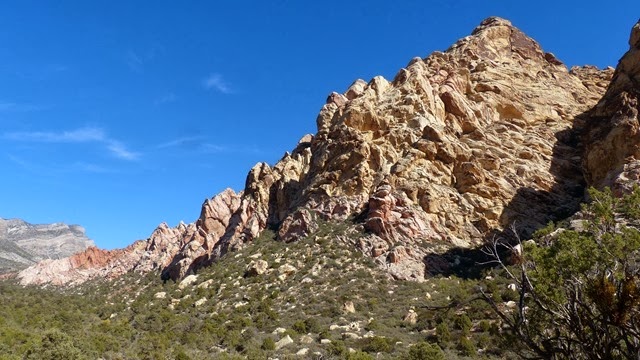 Today we moved 25 miles to the unnatural side of Vegas, to Road Runner RV Park, where we stayed the last time we were here. For $16 it’s not a bad place to spend a night. Plus we needed to do some laundry, dump, and fill our water tank before heading to Lake Mead, and wanted to do a few things online in case we don’t have internet there. This is where Debbie has been staying while getting her new coach batteries and making sure everything is working properly, which it seems to be. Tonight we went out for dinner at Sammy’s Pizza and Grill. Besides the excellent food and beer, it has a great décor and atmosphere, a place we would definitely go back to again.

Staying at Red Rock gave us the best of both worlds, getting to spend time in nature with close proximity to everything we needed from the big city of Las Vegas. And no, we did not set foot in a casino!